Walking into Boston, I admired the newly constructed metro line set to run test trains this Friday. The Boston skyline shone, as I was about to learn with the offices of state street securities and Black Rock , financial enablers of nuclear weapons, war and climate destroyers. In my hands for company I carried The Feel Trio, a collection of poems by Fred Moten. On the 28 overpass I stopped in my tracks reading, "I burn communities in shadow, underground, up on the/ plateau..." "...o, for a muse of fire music!" 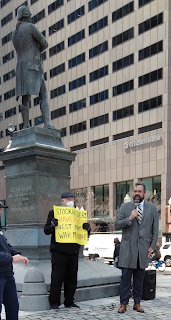 Rep. Mike Connolly of Cambridge and Somerville 26th said, "The number of unhoused doubled in the last decade, even before the pandemic--we see it at CASS. Instead of the war machine, build affordable housing! ...in Massachusetts we have Raytheon and Draper Labs fueling the war machine. Putin shows that with the bomb you can get away with anything. We need to do away with these weapons of mass destruction!"

"My son is seven years old," Garrett said. "How old are yours?"

Garrett Reppenhagen did a lot of missions with his scout platoon, "kicking in doors, house raids" and was part of a six-man sniper team "clearing roads, making sure no one was planting IEDs" (Improvised Explosive Devices) he said in an interview with CSPAN on the fourth anniversary of the US invasion of Iraq, March 17, 2007.

We agreed we now had to do what we could, as fathers, sharing in an act of repentance for "what we did in Iraq," he said, "to save our soul." 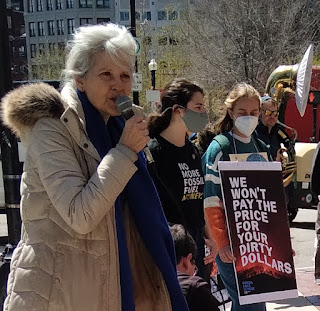 Dr. Jill Stein, 2016 Green party presidential candidate, "We are the ones who will take back our government, our future, our society, because it's going down in flames of war. Black Rock invests 260 billion in climate destroyers, 100 billion invested in coal, including 30 billion in new coal. We don't need new coal!"

Citing the latest report of the Intergovernmental Panel on Climate Change (IPCC) she said, "The time we have left to cut fossil fuel emissions is five years." Pointing to melting ice sheets in Antarctica, and the peril of Thwaits ice shelf, which could collapse soon. "Scientists are saying, in three-to-five years," she said, "adding 2 feet sea-level rise and impacting coastal cities like Boston." 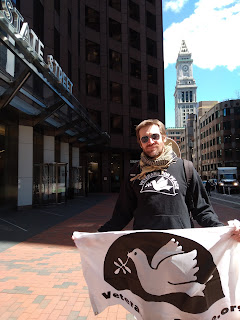 Garrett Reppenhagen, in front of the entrance to offices of Black Rock. According to Fintel, as of February 2022, Black Rock owns 6.6% of Raytheon Technologies Inc.

"As a sniper in Iraq I was exploited for the wealth of the corporate elite and the ambitions of politicians. War benefits the powerful and not the people. It is time to stop war profiteers from monopolizing all our resources. With the War Industry Resisters Network we can challenge the war economy in our own backyards."  –Garett Reppenhagen, Veterans For Peace Executive Director 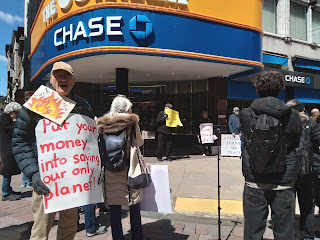 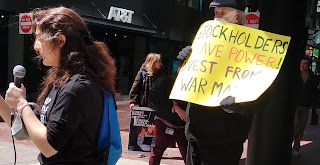 Ava Bertolotti, winner of 2021 first prize Free Thought which carries a $3500 award, "Climate Change used to keep me up at night. Praying--in English, in Arabic, staring at the ceiling, as branches were whipped past my window by the near-90 mile-per-hour winds of Hurricane Sandy--did not make me worry less about a tree crashing through the walls at any moment." 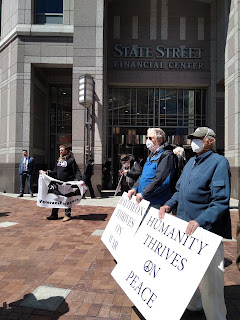 Ian Harrington said "These Merchants of Death have no conscience--while all of us were horrified by what was happening in Ukraine, Gregory Hayes, the CEO of Raytheon Technologies (which is one of the world's largest weapons manufacturers and is headquartered here in Waltham, MA) referred to it as an opportunity for international sales and stated, "I fully expect we're going to see some benefit from it."

"I burn communities in shadow, underground, up on the

is folded in overtones and outskirts. j tizol, harry carnival

and feel lined out around an open forte, an underprivilege

of the real presence, curled up around an outlaw corner."