First Entry--Here I am this morning 15 of April 2022 Taking a walk with my self. My faith has been drawing me, over the years, to reconcile bodily, enactment of God’s cross, but today this is a morning walk, we’re walking the path along the minute man trail, I’ve love to add history I’m downloading this app as I pass the community gardens talking now  on my way to Davis Square

Turning now to the gospel the readings of the day for the triduum, just want to remark that I’m beginning this with the desire to create looking at the hyacinth and the daffodil as I diary with the spirit of Thoreau with his impulse toward creativity and simplicity walking this l-shaped route this morning out to Concord and turning toward Walden pond where I’ll meet Emily where she’ll be with friends this afternoon, it’s a gorgeous moon, sitting low in the sky, a giant globe.

My thoughts are really just in this place, ping ponging with my observations, curious and itching around as I settle into the acceptance of a creative walk, allowing my thoughts to sit and stir for some future transcription having recorded this previous entry, the sense of desire and possibility as I entered into Davis square I saw and reflected on the first reading of the day, really was struck, just by a line that said, the Christ figure as we read as Christians was beyond human semblance and beyond that I visualized an art piece done by an incarcerated artist-- Nicole Fleetwood’s Marking Time came into my hands --borrowing yesterday from the library, she described briefly that the artist used the moment of great brutality and asked the fellow to press his bruise swollen face against the square [window] of his cell, if you can imagine the black blue skin with me, the painful thought, “even as they awed at him he was beyond human semblance” and we now from the passion story of the flogging that would have been his sentence, only, merely, Jesus coming before the crowd later, Passion Sunday we read “What do you want me to do with him?” What do you want me to do with him, “Crucify him!” Well, this is a US state, and we have figures of--beyond human semblance to the state This State that surveills and weaponizes poverty. There were two individuals within the red line open as I pass at 5:22, as I passed there was a train going to Alewife, I thought, yep, they made it through that part of the night, it’s cold feels like 37, maybe 44, kind of a wet cold after a rain last night, but  it just pierces a couple layers and stops with the hand in the pocket, but you have people who in their way, long term homeless, long-time homeless and found this way of life. We talk about homeless, we talk about where we can re-direct our money, our taxes. Last night I had this interview with this women named Mary Regan--she was sharing her story, in 1983 [President] Reagan makes the draft again for men, and she thought for women. In her words: “I was such a feminist I thought for sure he was going to do it for women next” that she came to this realization that she could not carry guns and would need to and did apply for conscientious objection in preparation for the draft, last night just sharing that this purpose of war tax resistance to redirect our funds to health and education,  housing, okay, so the needs of humans, my point is that we have the figure of Christ who draws us and who brings us in awe to God, but beyond human semblance, this real way that the beaten, bruised, cruci--no, this part of the passion-- this person beaten down, the desire of the prison to take someone, separate them. To begin this walk is to say with Thoreau, not my taxes, no, my refusal, so I am with my body, my mind, bring my company to my future self, this reflection.

Further along on what will about seventeen miles along the Minute Man trail...  After several hours, walking since five am, I stopped for a pumpernickel bagel, and couldn't resist a tray of Boston Creme donuts. Sharing this picture with my wife as a check-in, she said: "I love where you see beauty." 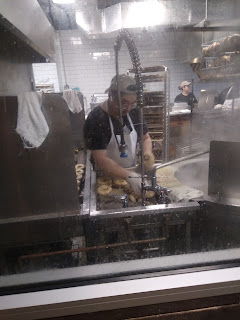 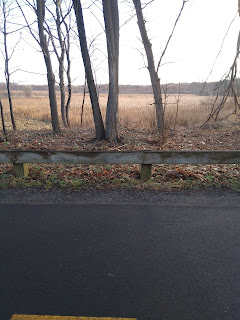 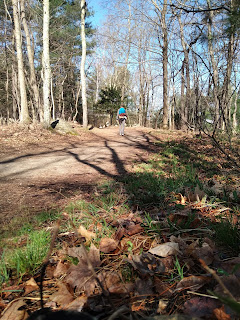 Fifth entry, So I'm walking past many of the major places on Battle Road, with lots of signage, markers of this legacy of the Minute Man trail and I'm thinking about peace makers who have always tread the tracks of war makers, just saw a sign of the witness cowering in her home, the Tavern. I was thinking of women who were witnesses in Ukraine of fighting. I know as a person of faith I try and bring this to the texts, bounce this off the lived experience of the Jewish people who had this sense of, this conflicted sense of how change happens, how the promise is fulfilled, and their scriptures becoming ours we inherit this just war theory, renewed and vivified today, just days before Patriot's Day, Massachusetts April 19. Miriam's Corner here. I'm unlike some people and I'm a lot like millions of people, millions and millions of us who want peace, hundreds of millions of people are having conversations--"near here are buried British Soldier, April 19" says a sign, what is it to mourn the enemy not just my dead, your dead, our dead--Going to the cross and saying, Jesus there you were, Remember me  when you come into your Kingdom, I'm not a clergy person giving last rites. I'm not a chaplain of the military following these footsteps. And I'm reminded how difficult it is, as a thinking person, to--I was reading in Nicole Fleetwood's book Marking Time, the difficulty as people talk about justice in the conversation about mass incarceration, are we excluding the immigrant from our conversation? is our paradigm nationalistic? but are we aware of the way in which the slave narrative both perpetuates the warrant for prison, as people of faith are we aware that we are perpetuating the agnus dei, the one who went to suffer for us all, the scapegoating, that the prisoner is just another--you know we warrant our current incarceration of people, they take the sins for all of us, do we beatify the suffering of people in the narrative that just perpetuates this violence? So there's an awareness when I give my sympathy in this direction--I'm walking toward Walden Pond as a recreational site, as a destination, retrieving Thoreau's journey, his own lifestyle changes, his own questions of his time, how do I engage the 750 billion that is budget, I was aided by this NYT Magazine article from Sunday describing the difference between an average median income of the US of $100,000 compared to the income of Jeff Bezos 170 billion--it's unimaginable, and so as 130 persons became billionaire's 2020-2021 this article maps  out a way of imagining, so the average median income of a US household is a snowflake in a snowglobe, whereas Jeff Bezos is making a statue of Liberty, the average stride of an adult compares to a flight from New York to Louisville, Kentucky, so we think about 170 billion well, on the magnitude of 750 billion of the military budget it's difficult for us to even conceive that 330 million of us are all contributing to this budget by our taxes every year, when some of us say no, I said in my public statement acknowledging my protest, I said go ahead and contact me. And you know, I'm married, I filed as a married couple, approaching a road here--and I'm just saying that as I think about undoing patriarchy as a stay at home dad, it's not without substance for an analogy of what Thoreau's lifestyle pointed to...here's a road, I need to be careful, entering Concord soon.

The Wayside, Home of the Hawthornes
455 Lexington Rd, Concord
then from Concord to Walden Pond following the path he would have taken from his friend Nathaniel Hawthorne's house. 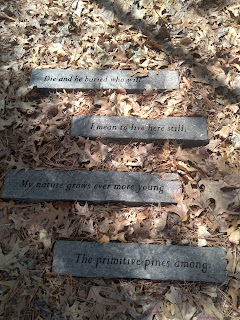 Die and be buried who will
I mean to live here still,
My nature grows ever more young
The primitive pines among.
Henry Thoreau--Walden Woods
In Black Walden, Elise Lemire tells story of Blister Freeman and other Blacks who found refuge in Walden Woods. 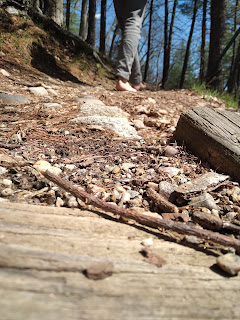