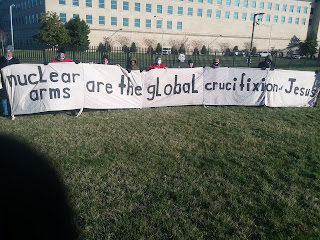 Photo shared by Art Laffin of Dorothy Day Catholic Worker with banner outside the Pentagon Good Friday, April 2, 2021
Today we mourn to mobilize and disrupt modern day crucifixions. (Revised from original script prepared by Art Laffin for vigil at Pentagon).

Last year Djamel Ameziane, a former Guantánamo prisoner, was legally and morally vindicated as the first complaint related to the "war on terror" in which the US was found responsible to a victim of torture, according to the long awaited decision May 27, Inter-American Commission on Human Rights (IACHR).

Let us continue to pray and work for the abolition of torture worldwide, and for the immediate closing of Guantanamo and all torture centers.

We acknowledge the privilege to pray, not as white saviors, but as members of a white church hell-bound and held-bound by a cross built of racial hatred, rooted in the sin of white supremacy.

For all those American Indians and African Americans who were slaughtered, enslaved, lynched and murdered simply because of their skin color, we pray.  For the disproportionate number of African Americans are imprisoned and executed, we pray, and remember you.

We decry the murder of Black people by white police officers. During the murder trial of former police officer Derek Chauvin is now underway in Minneapolis, we recall with shock and horror George Floyd crying out multiple times: “I Can’t Breathe,” as Officer Derek Chauvin’s knee was on Floyd’s neck for 9 minutes and 29 seconds before he died. Too many have suffered and died because of White Supremacy and State violence! Black Lives Matter!

Meanwhile, Violence targeted against Asians 3,800 since March of 2020, over a thousand attacks documented since December. Systemic racism, inherent in oppressive economic and political structures and policies, crush the poor and people of color, denying so many of their dignity and human rights.

Loving God, you have instructed us that every person is created in your image and that all life is sacred. We repent for the sin of racism. Deepen our commitment to work for justice and equality for all people of color as we strive to make the Beloved Community a reality here and now.

We mourn 2 million Iraqis who have died since March 4, 1991 as a result of the U.S.-UN led sanctions, U.S. bombings, invasion and occupation. We pray for the injured and displaced --millions of persons set in exile by fear. For a generation of Iraqis traumatized. We mourn the conditions for the rise of the Islamic State. We call for all CIA and U.S. military personnel and security contractors currently in Iraq to leave immediately, and that the U.S. beg forgiveness from and make reparations to the Iraqi people.

We mourn all victims of U.S. drone strikes and call for an immediate end to the use of these immoral and illegal killer-drones in Afghanistan, Pakistan, Yemen, Somalia and elsewhere.

We call for the U.S. to apologize and make reparations to all victims’ families of drone strikes. We pray in gratitude for all who have resisted and who have been imprisoned for decrying this diabolical robotic warfare. We commit ourselves to abolishing these murderous drones, our American death squads of the skies.

We pray for Civilian Commissions to study the implementation of the Treaty of Prohibition of Nuclear Weapons; for all parties to cease and desist from the criminal maintenance of nuclear weapons; we pray for the arrest of those implementing the 30-year nuclear modernization program estimated to cost $1.7 trillion; for an end to the militarization of space and all U.S. arms sales and military intervention worldwide; for the conversion of our war-based economy to one centered on serving the common good. This includes redirecting the $740 billion 2021 U.S. military budget to meet urgent human needs in this perilous pandemic time.  We call for the Pentagon to be converted and transformed from a center of warmaking to a center that serves life!

We call for the U.S. to vote in favor of Special Drawing Rights with the $650 Billion Emergency allocation supported by the Treasury, the low-income countries will see $21 billion and other developing countries to see another $220 billion.

Read the letter on SDRs, aid and debt relief from the US Conference of Catholic Bishops and Jubilee USA Network here.

The U.S. began its criminal military intervention in Afghanistan in 2001. In 2019 the UN found that number of Afghan civilians casualties surpassed 100,000. Last year we mourned the sixth straight year in which Afghanistan civilian casualties exceeded 10,000.  On this Good Friday in mourning the ruthless U.S. military crucifixion of an entire generation, We withdraw our consent.

Let us pray for the people of Afghanistan, particularly the Afghan Peace Volunteers, the Helmand Peace marchers, whose sacrifices made in blood and tears, we pray are met with success.

We call for the immediate arrest U.S. Congressional funding and authorization for military force, for demobilization of all military and CIA personnel in Afghanistan, and that the U.S. Ambassador give affadavit of war crimes to the people of Afghanistan.

Crucified Victim #9--Nonviolent Revolutionary Victim                                                         We remember all those who have given their lives and who have sacrificed their freedom as they have struggled, without using violence, for justice in their countries, including Tunisia, Egypt, Bahrain, Libya, Yemen, Iran, Iraq, Palestine, Afghanistan, Saudi Arabia, Syria, Honduras and Myanmar, to name but a few. We call on the U.S. to repent for its role in helping to aid abusive regimes that repress internal dissent. May all that has been stolen from these sisters and brothers be restored.

We pray and work for a dismantling of the mass incarceration complex. In the words of Jesus, let us "proclaim liberty to all captives."

Mindful that Jesus was born as a migrant and exiled as a refugee, we remember today those immigrants who have been crucified to a cross of exploitation, racism, oppression and war. We remember all those who have fled their homelands in Syria, Iraq and throughout the Middle East and in Africa due to war. We remember, too, those who have been driven from their homes and the hundreds who have died in the Mediterranean Sea and crossing the Mexico-U.S. border. Loving God, help us to learn to love and welcome the immigrants in this land. Give us the courage to stand for justice for all immigrants instead of imprisoning them in dehumanizing detention facilities. Give us the courage to speak out and expose how our country's policies of globalization and free trade are driving people to leave their countries and tearing families apart. Help us to take down the walls of division and fear that create physical walls of separation on our border. Teach us the words of love you would have us speak as we call for comprehensive immigration reform in this land.

Crucified Victim #12--Our Desecrated Earth                                                                        Creator God, we confess that the way we live today is desecrating the earth,
industrial pollution, toxic deadly chemicals, wasteful oil consumption, pipelines, nuclear radiation and the effects of preparing for and waging war. With some 800 military bases worldwide and a vast global war machine, the U.S. military is the world’s single biggest consumer of fossil fuels and hence most directly responsible for changing the climate, the seas and the balance of life, and dispossessing the poor and future generations.. Creator God, lead us out from our path of destroying your creation. Empower and sustain all those who are nonviolently resisting threats to land, water, air and sky throughout our world. Empower us to safeguard the earth, our common home, and all of creation and choose life for all that is at risk.