7306 days open--and what are we doing about it? It is a credit to a committed coalition of human rights defenders that we have seen bi-annual attention to the issue since Obama left office. A closer look will show some of the minor victories month by month. This year in review is  partial.

Since a year ago, former prisoners of Guantánamo organized their open letter to President Biden specifying demands--our role has been to amplify that letter.

Jan. 22, 2021 Ahmed Rabbani, still prisoner at Guantánamo has published in UK Independent a letter to Biden:

When I was kidnapped from Karachi in 2002 and sold to the CIA for a bounty with a false story that I was a terrorist called Hassan Ghul, my wife and I had just had the happy news that she was pregnant. She gave birth to my son Jawad a few months later. I have never been allowed to meet my own child. President Biden is a man who speaks of the importance of family. I wonder if he can imagine what it would be like to have never touched his own son. Mine will soon be 18 years old, and I have not been there to help him or to guide him.

I have been locked up for his entire childhood, without charges or a trial. ...

The Senate Intelligence Committee report on CIA torture was completed “on his watch,” as they say, in 2014. It’s a report that I feature in. It says that I was tortured for 540 days in the ‘Dark Prison’ in Afghanistan “without authorization” — whether that makes it better or worse, I am still undecided. I can confirm that the torture did take place, although I couldn’t have counted the days myself: the days and nights blended into one while I was hung from a bar in a black pit, in agony as my shoulders dislocated.

I have no interest in revenge, but I want people to know what happened and why it was swept under the rug.

Feb. 21, 2021 Dorrine Marshall of Vets for Peace with Orange County Peace Coalition hosts dialogue "Close Guantanamo" with Mansoor Adayfi, Andy Worthington, and James Yee. Andy Worthington is a historian, investigative journalist https://www.closeguantanamo.org/  and film director of a documentary focused on Guantanamo. U.S. Army Capt. James Yee, author of For God and Country was a Muslim chaplain at Guantanamo who counseled prisoners and was imprisoned himself for his service. Mansoor Adayfi was released in 2016 and resettled in Serbia. He is a talented writer, and his memoir, Don't Forget Us Here: Lost and Found at Guantanamo,

March 8 Boston area activists marched from the Common to the offices of the Globe decrying its lack of attention to the case of Julian Assange and the prisoners at Guantánamo. March 11 marked the 7,000 day of the prison's existence as an off-shore muslim detention center and activists contributed to Andy Worthington's project the Gitmo Clock.

March 17, Jeremy Varon had published on Waging Nonviolence "Obama said he'd close Guantánamo, these activists are pushing Biden to do so," a phenomenal review of the phases of Witness Against Torture going back to 2005.

April 6, 2021 scholarship by Susan S.M. Edwards "US Counter-Terror Law and The Chronicles of Torture" went online. From abstract:

This chapter documents US counter-terror law demonstrating how torture has come to symbolise American “exceptionalism” where executive power is out of control. The dangerous fusing of patriotism with vengeance and the contumacious disregard of the “Rule of Law” in the US’s rewriting of torture enables the perpetration of wanton sadism against Muslim detainees in Guantánamo, and strategies of sexual humiliation enacted and performed in Abu Ghraib. Such abuse is perpetrated by men and women and authorised by torture lawyers and politicians.

May 15, 2021 Saifullah Paracha, 73, is cleared for release. A Pakistani businessman arrested in Thailand in 2003, in 98 days he will mark another birthday in Guantánamo.

Witness Against Torture held vigils in Washington to mark the June 26 UN International Day of Survivors of Torture. My message to President, my Reps and Senators,

The envoy seat remains our top ask in hopes that Biden will quietly do the right thing transferring prisoners cleared for release into the custody of 39 willing host countries. That summer we still hoped Biden would make known his position and while we had no idea Republicans would happily pour an extra 25 billion into his already obscene Defense Appropriations of $770 billion which passed the Senate in December checked only by 11 dissenters: Cory Booker (D-NJ) went to the floor to change his vote from yes to No, joining Braun (R-IN) Gillibrand (D-NY) Lee (R-UT) Markey (D-MA) Merkley (D-OR) Padilla (D-CA) Paul (R-KY) Sanders (I-VT) Warren (D-MA).

After a wave of coverage about patriotism, Joseph Clark reported July 7 The Washington Times:

"It's time we finally close the detention facility at Guantanamo Bay," said House Appropriations Defense subcommittee Chair Betty McCollum of Minnesota, in a statement introducing the bill, which would have lifted provisions blocking the transfer of detainees from the facility.

July 19, 2021 Abdul Latif Nasser touched down on Moroccan soil. A prisoner for more than nineteen years, Nasser, 56, he remained in a Casablanca jail pending investigation but was briefly reunited with extended family members on Eid al-Adha, the Muslim holiday The Feast of Sacrifice, as Carol Rosenberg reported for the New York Times.

July 22, 2021 At UAE Embassy, activists including Gary Thompson, Allison Lafrette, Kristin Davis, and Doug Spaulding highlighted the Guantánamo of the East and highlighted the plight of Ravil Mingazov, a successful ballet dancer in Russia. Reprieve writes: "Mingazov was also an officer in the army. He and his family are Muslims of Tatar ethnicity. They tried to flee Russia with the hope that they could practice their faith without fear somewhere else. But Ravil was captured in Pakistan and sold to the US for a bounty. He was sent to Guantánamo Bay in 2002 and spent nearly 15 years there." The transfer to UAE was not a release, but rather to horrific treatment: "When they arrived they spent 70 days blindfolded and shackled to the wall," Mansoor Adayfi said Feb. 21st here (41:18). "Four Afghanis were released 2 years ago, one died after. Two men totally lost their minds there." Photo by Ella Thompson. 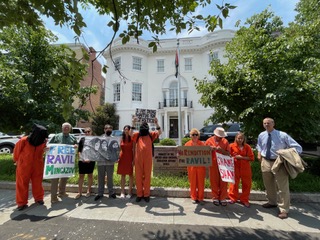 August 4, 2021 our Helen Schietinger had published "The Atrocity of Torture" a Letter-to-the-editor of the Washington Post:

We have never had access to a full accounting of the torture endured at the hands of the U.S. government in our “war on terror.” An unredacted Senate torture report has not been released. No U.S. official has ever been held accountable for the authorization and torture at CIA black sites or in official U.S. custody in places such as Bagram prison in Iraq and Guantánamo prison in Cuba. In fact, Gina Haspel was appointed director of the CIA even though she had overseen the torture of prisoners as head of a CIA “black site” in Thailand.

Until we come to terms with the atrocities committed by our own government in the specious service of national security, we will never have the moral authority to condemn other nations.

August 17, Saifullah Paracha, the oldest prisoner, turned 74 at Guantánamo. Thanks to Reprieve, 3,145 letters from supporters would be sent to him.

September, mobilization to re-frame the history of the War on Terror as a crime against humanity for instance, a petition for Ahmed Rabbani circulated by Mark Maher, US Reprieve attorney would gather 9,759 signatures.

The CIA tied up his arms and hung him up to slowly and excruciatingly dislocate both his shoulders. He was moved to another prison and held in complete darkness for 545 days. No toilet. No shoes. No proper clothes. No bed. Eventually he would be sent to Guantánamo where he remains until today.

Dr. Maha Hilal published opinion 09/10 "US War on Terror is Still Omnipresent" DM.com . In addition, a project by the Center for Constitutional Rights The 9/11 effect.

In October many viewed the War on Terror Film series from Center for Constitutional Rights. Featuring 20 films made over 20 years, from the Oscar-winning Citizenfour and Taxi to the Dark Side to the Oscar-nominated Dirty Wars and the highly-acclaimed The Mauritanian, Four Lions, Fahrenheit 9/11 and The Feeling of Being Watched. Recorded film discussions available here.

Then came the unprecedented Testimony, Guantánamo Prisoner Majid Khan at Sentencing Hearing October 28, 2021, Guantánamo Bay, Cuba ‒ his story of being disappeared and tortured at secret CIA prisons, or “black sites” for three years. That same day Mohamed Ghobari of Reuters reported that UAE had released 12 prisoners formerly held at Guantánamo to Yemen.

November 12-13, WAT joined Jeremy Varon and Maha Hilal as they presented to "Guantánamo: 20 Years After" hosted by Sarah Birch at UK's University of Brighton who led demonstrations and showings of The Mauritanian.

Our work as active bystanders has maintained pressure. We fast virtually now and in many cities call on all promoters of human rights to elevate the 20th anniversary of Guantánamo Jan. 11th. (Join us in the Boston Common at Park Street 1/11 (1pm). Please dress warmly as the weather will be a frigid below zero with windchill.) 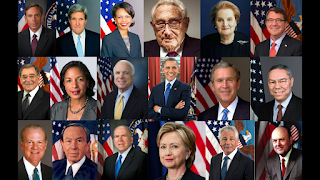