For the second time in two weeks, we mourn the death of a Former Guantánamo Prisoner. 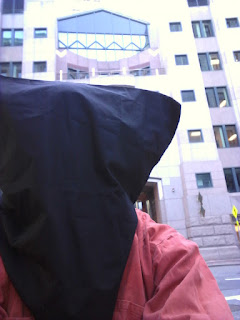 (Selfi taken this afternoon outside Offices of the Globe, 75 State Street, Boston)

He died in need of heart surgery wrote Moazzam Begg, co-founder of the UK non-profit CAGE. The Facebook post:

...bin Ali, Tunisian ex-Guantanamo prisoner, died last night. He had spent `13 years imprisoned by the US without charge or trial. Lutfi was initially resettled to Kazakhstan where conditions had been very difficult and one of the Guantanamo prisoners died as a result of neglect and lack of medical treatment. Lutfi had come to Guantanamo a very fit and healthy man but, by the time he left he was suffering a whole host of serious medical problems.

Subsequently, due to ill health, Lutfi was allowed to move to Mauritania from where he hoped to return home. However, he was in desperate need of getting heart surgery--which was very costly.

French Muslim charity, Barak City, had agreed to take care of the surgery and costs just before it was shut down by the Islamophobic French government. In the end, Lutfi was unable to receive treatment he so desperately needed and never saw Tunisia again.

May Allah forgive Lutfi and grant him an abode in the highest level of Paradise and bring ease to the loved ones he left behind.

The death of Lutfi bin Ali marks the second of former Guantánamo prisoners in two weeks. Ibrahim Idris died in Sudan also as a result of medical issues arising from torture during imprisonment.

When asked for an appropriate prayer, Dr. Maha Hilal, co-founder of the Justice for Muslims Collective said,

When Muslims die, we say 'To God we belong and to God we return."

Susan McLucas organized a rally and march from the Boston Common to the offices of the Boston Globe:

"We were happy to be standing up for Julian Assange and prisoners at Guantánamo in front of the Boston Globe today, telling the Globe they need to cover the Assange case which they haven't in over a year."

Speaking about the recent film The Mauritanian, she said:

We know how incredibly sad and wasteful of people's life Guantánamo is. The protagonist of that story is so forgiving and spiritual. It's a testament of Islam. He said, "The word for forgiveness is the same as freedom so I've been free these past 8 years." It portrays him in such a positive light.