For Intenational Women's Day, I'm indebted to the many women on the front lines seeking justice where there's been a gaping black-hole. To mark the occasion meet a few of them through my review of Guantánamo Voices: True Accounts from the World's Most Infamous Prison. Edited by Sarah Mirk. New York: Abrams ComicArts, 2020.

The red panel captures a force-feeding. In the lower right hand corner of Tracy Chahwan's contribution to nonfiction comic Guantanamo Voices: True Accounts from the World's Most Infamous Prison, the red background keys our shock for the image and its caption: Emad Hassan "stayed on a hunger strike for seven years."

"Bold colors are my style," Chawan explained, "but the color pallet helped my piece have consistency with the other contributors' .

Emad Game of Thrones, in the middle of the next page, enjoying the recommendation for his release. 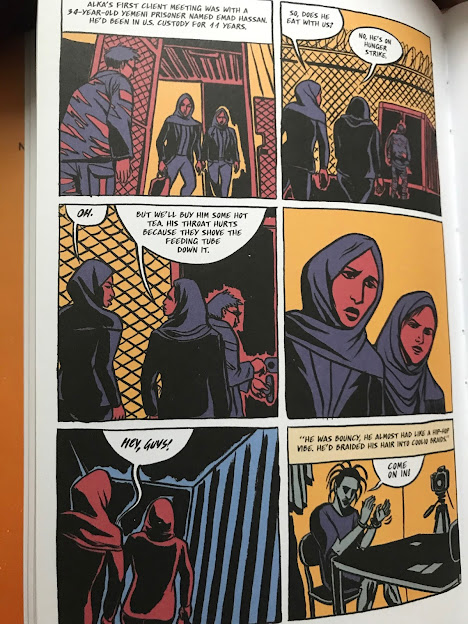 (Art from pages 136-37 by Tracy Chahwan, used with permission)

"This, I could actually stomach reading," my friend Cara says over coffee while our kids have a pod playdate. 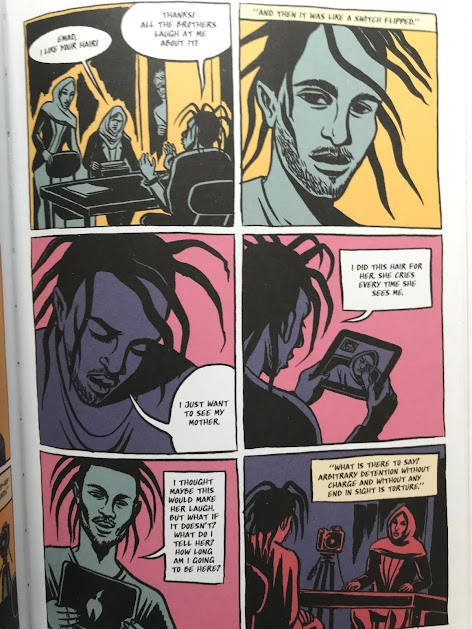 Behind the story, the origin of the comic rendering of True Accounts intrigues me. Sarah Mirk, the editor of Guantanamo Voices, previously collaborated with Lucy Bellwood in The Secret Life of Gitmo's Women (2014), produced by Narratively. It presents stories of women, some assigned to sexually humiliate the Muslim men. A vignette of sexual violence she experienced at Guantanamo is particularly haunting. In it, I recognized the Treasure Island of Pinocchio, where boys go to make asses of themselves, beasts, crudely degrading themselves and those around them. To follow up this project, the nonfiction comic hub, The Nib, generated the network of artists.

The asinine logic of Guantanamo will leave a lasting impression on the reader of this comic. "Just remember," a man says in the books final frames, "they're in there for a reason."

Mansoor Adayfi, whose memoir comes out this summer, speaks exclusively, refreshing in his almost fairytale encounter with a princess, the name the camp dubbed the huge iguana that roamed freely up to his cage for a crumb daily. Who later found him, when, for interacting with the iguana, he was put in solitary confinement. During his fifteen minutes per week --the outdoor cage called "recreation"--Adayfi would talk to Princess.

"Close to Breaking" say the notes of an observer. The panel reminds you this story is full of logic, a psychological warrant for every mental breakdown. While opposite, the green iguana in a crown and robe drapes half the page. At bottom, the caption, "She reminded me every week that I was human and that life still had beauty."

Human Rights Activists may recognize the defense attorneys assembled as a cast of narrators: Alka Pradhan, Shelby Sullivan-Bennis, Tom Wilner. The script of one story shows two meals, showing that no matter what sense our political discourse, we are free. At dinner one night, Pradhan explains to her husband, a former naval officer, and his father, another veteran, "We created an entire new legal system for brown men. If these were white men from France or Germany, there is no way Guantanamo would exist." Juxtaposed aside this, another panel shows prisoners, still separated from their families, detained indefinitely without charge, eating from plastic trays.

A "sunrise" color palette designed by Casimir Lee successfully unifies eleven comic styles. Based on a postcard sold on base depicting Guantánamo as a serene, tropical environment, the cover illustration of the prison sets an iguana in the foreground laying on rocks beneath a gorgeous sky, orange over cotton clouds, while inset panels of a blood slashed hand, a hooded man, then a solitary sitting prisoner, belie the torture masked by the superficial narrative of the US Government.

"I always knew the envelope would be red," said Alex Beguera, who portrayed the story of Navy Justice Advocate Matthew Diaz sending by mail the names of men in Guantanamo to a reporter. Red colors the panel depicting the background as The Distinguished Service Medal is pinned to General Geoffrey Miller, former Guantanamo base commander. The subsequent pages conclude with Diaz in financial straits, unemployed, drawing down his daughters' education fund, looking wistfully up at the red stripes of the United States flag.